Today, Associated British Ports (ABP), the UK’s leading and best-connected port operator, has announced its ambitious plans for the Port of Lowestoft, which will help create a competitive edge for companies across the Southern North Sea (SNS) energy sector and the wider East Anglia region.

The project will deliver state-of-the-art port infrastructure to meet the offshore energy industry’s current and future demands, ensuring the port can accommodate the next generation of offshore support vessels. The facility will provide a site that is suitable for Operations & Maintenance (O&M) activities in addition to quayside suitable for construction support activities.

Andy Reay, ABP Group Head of Commercial (Offshore Wind), said: “ABP is the number one host of O&M bases in the UK, providing infrastructure for operations and maintenance facilities to support offshore wind farms in Barrow, Grimsby and Lowestoft.

“Our LEEF project represents an exciting step change in our ability to service customers in the growing Southern North Sea energy sector. It will re-engineer existing quayside in the Outer Harbour and create the modern infrastructure needed to support a rapidly changing energy industry in a growing regional economy.”

Centred around the Outer Harbour at the Port of Lowestoft, LEEF is a major opportunity, the first phase of which will require around £25m of investment. When complete, the project will provide 360m of berthing space for simultaneous use by three SOVs and deliver up to 8 acres of flexible storage and marshalling area. In addition, it will create around 5,000 sqft of new office space with direct quayside access.

Andrew Harston, ABP Director for Wales and Short Sea Ports, said: “The Port of Lowestoft already plays a key role in supporting the local economy, contributing £30m annually and supporting over 580 local jobs. We’re looking forward to this role growing in future, with the rise in activity, new investments and new customers.”

“The LEEF project has the potential to attract many supply chain companies to Lowestoft and create an energy cluster renaissance, bringing new jobs and prosperity to the area and supporting the substantial and strategically important investments being made in Offshore Windfarm developments off the Suffolk and Norfolk coast.”

Building on its long history of servicing the offshore energy sector, the Port of Lowestoft provides a highly competitive package for offshore wind customers. In 2019, Scottish Power Renewables opened an Operations and Maintenance building in Hamilton Dock, to support the 714MW East Anglia ONE offshore wind farm. The port is also home to the O&M base for Scottish & Southern Energy’s (SSE) Greater Gabbard Offshore wind farm, which is located 23km off the coast of Suffolk, England.

The port’s offer is complemented by Orbis Energy and PowerPark, where key offshore energy developers, operators and service providers are located, including SSE, ScottishPower Renewables, SLP and Turner Iceni.

LEEF forms a central part of a new masterplan for the port, which provides a long-term view of how ABP will work with its partners to ensure that the prosperity generated by investment reinforces the wider development of the town as a superb place to live, work, visit and invest.

Peter Aldous, MP for Waveney, commented: “Lowestoft is strategically well placed to benefit from the wide range of opportunities available in the Southern North Sea, which include one of the largest clusters of offshore wind farms in the world, rich fishing grounds and gas fields in which to store carbon.

“The Masterplan provides a framework for investment in Lowestoft Port that will attract business to the town, providing jobs for local people. I look forward to working with ABP in turning this vision in to reality.” 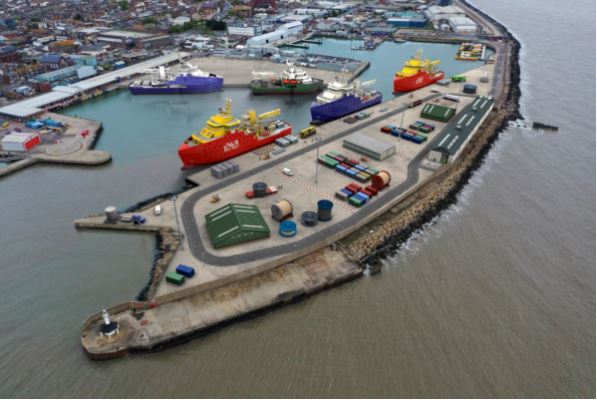